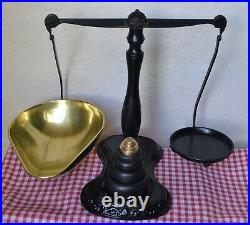 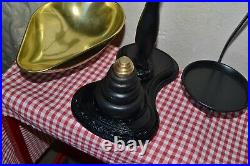 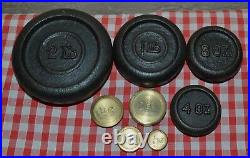 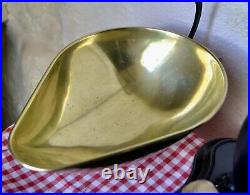 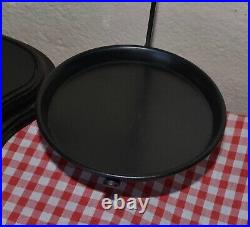 The company manufactured more than 750 million springs for war purposes and parts for the De Havilland Mosquito. These scales are very unusual and hard to find. I don't think many were produced as very few come onto the market compared to other SALTER models. They have been used but the paintwork is in excellent condition just a few slight scuff marks. The brass pan is very slightly discoloured in a few places. As it is so shiny these marks do not detract from the overall appearance. Brass is soft and when potentially corrosive stuff, like salt, is placed in the bowl and not wiped clean a reaction happens and the surface of the brass is affected. Sometimes it can be almost all removed but it rather depends on how long the stuff was left in there. Almost every bowl I come across has some similar marks.

They are a nice size, 17 wide and 12 high, not taking up too much room on your worktop. UK couriers will not accept a PO Box address as US couriers will not deliver to one. You may be concerned that they have to be sent such a long way but I can assure you there is no need.

I use large sturdy boxes and pack all the spaces so they remain rigid. The scales are wrapped in large bubble wrap and bound with tape so they do not move about.

The weights are packed separately also in large bubble wrap. I will gladly provide further information or photographs. The item "VINTAGE ENGLISH SALTER BLACK BEAM SCALES 8 WEIGHTS 4 BRASS 4 CAST IRON" is in sale since Friday, August 7, 2020. This item is in the category "Antiques\Mercantile, Trades & Factories\Scales".

The seller is "stuffbyiris" and is located in Alston. This item can be shipped worldwide.