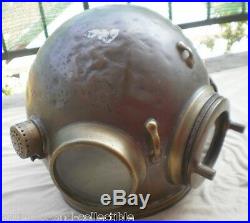 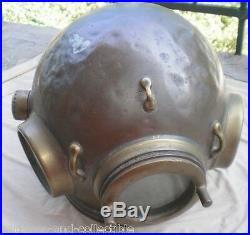 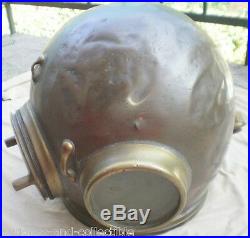 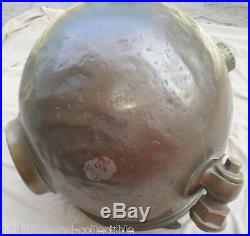 Heinke helmet, in very good condition and with a very nice old patina, without any visible reparations in it. Charles Edwin Heinke was born the 4th. September 1818 and passed away in 1869. His mother was a prussian lady and his father was a boile builder at 103 Great Portland Street, in London. After 1844, he worked only in the designing, building and saling of diving equipments, as well in England, France and Holland, and all over the word. His first goal was to compete with the Siebe Gorman equipments and his most important innovation was the square brass breast plate, which was much more hard and resistent to deformations than the ubiquitous copper breast plates. This one has also a special exit gauge, called "peppemil" by the divers, that permits a faster ascent or descent. The helmet has three round windows of the same size and without grills for quick replacement and better light entry. We can valves of two different models. The oldest one is coupled directly at the air intake, and the other, more sofisticated, is screwed to it. His most famous helmet was the Pearler with square breast plate. The company changed several times his name. Heinke submarine engineer, from 1844 to 1871.

Heinke CE was absorbed by Siebe Gorman in 1961. Heinke build also a very popular twin hose regulator, the Merlin. We can say that Charles Edwin Heinke improoved the famous Siebe Gorman helmets at he same time that the french Joseph Martin Cabirol, competitor of Siebe Gorman, worked to make them lighter. Both were great contributors to the exploration of the underwater world. Add a map to your own listings.

The item "Old vintage English HEINKE Pearlier Diving Helmet, about 1900" is in sale since Friday, June 24, 2016. This item is in the category "Antiques\Maritime\Diving Helmets". The seller is "antiques-and-collectibles_bt" and is located in Belgrade. This item can be shipped worldwide.