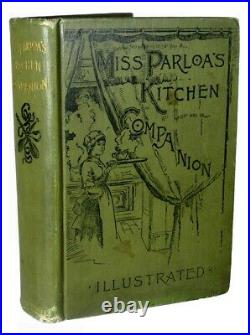 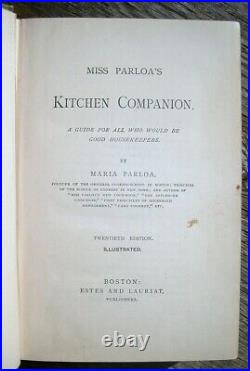 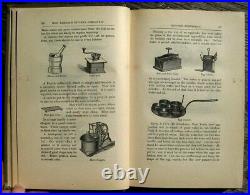 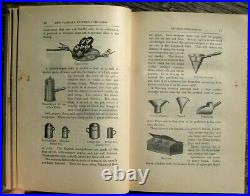 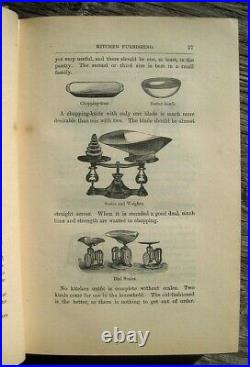 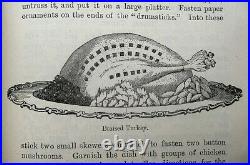 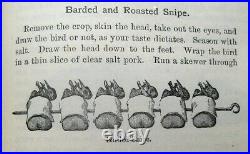 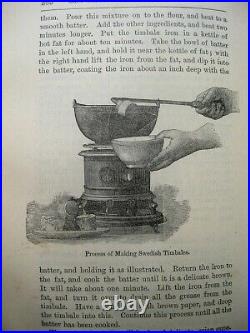 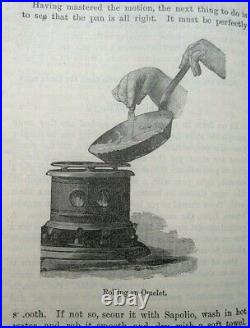 Note: Many of my clients are expert chefs and food service professionals, homemakers, and aspiring Chopped Champions seeking detailed information about their preferred fields of cuisine. For their convenience I include the following details directly from this book.

No torn, loose or missing pages. This is Maria Parloas KITCHEN COMPANION, one of the larger collection of recipes she published in her lifetime more than one thousand recipes in all. She is said to have been one of the first people to advocate the teaching of home economics in the nations schools. Miss Parloa wrote seven books, as well as numerous articles, pamphlets and bulletins. She was also a frequent contributor to Good Housekeeping and Ladies Home Journal.

In October of 1877 Maria Parloa opened Miss Parloas School of Cookery at 174 Tremont Street in Boston, in the former studio of famous American painter William M. A writer of the period described Miss Parloas lecture room as. A spacious, inviting apartment, as far different from the ordinary schoolroom as anybody can imagine. Half of the room, intended for the audience, contained tiers of low platforms, neatly carpeted, on which were ranged fifty or more comfortable chairs; the other half was carpeted with oil-cloth, and in this part stood a large stove and several tables. Near by were well-stocked china closets and a refrigerator room.

A blue and white tiling, covering the wall space around the stove and above some of the tables; half-a-dozen photographic views of the mountain scenes familiar to Miss Parloa; a few other pictures, of a bright character; and best of all, a mass of plants and vines, partly filling an immense window through which sunlight streamed. These were some of the things that made the place so cherry as to convince all comers that the study of cookery was to be made a real pleasure. Miss Parloa continued her School of Cookery at Boston until the summer of 1882, when she relocated the school to New York City. The Preface of MISS PARLOAS KITCHEN COMPANION states.

A large part of my leisure time in the last few years has been passed in working on this book, which it has been my ambition to make of real and lasting value to all who may use it. Those who are familiar with my other cook-books will see that this one contains not only many hundred new receipts, but a number of chapters on important subjects treated only briefly, if at all, in my earlier works. My publishers liberality in regard to illustrations and the size of the book has enabled me to give a more comprehensive volume that it has ever before been my privilege to prepare, and one which I hope may be found a trusty guide for all who are traveling on the road to good housekeeping. For your convenience and interest, I have created summaries of the chapters and the numerous recipes they contain, found below. I hope youll take a few moments to have a look.

CHAPTER TWENTY-FIVE WHAT EVERY HOUSEKEEPER SHOULD KNOW. CHAPTER TWENTY-SIX BILLS OF FARE. REMEMBER FOLKS, THIS IS AN 1887 ORIGINAL. THIS BOOK IS 134 YEARS OLD!! Please be sure to add me to your List of Favorite Sellers. Don't miss out on any of my latest listings. NEETMOK BOOKS IS A REGISTERED MEMBER OF EBAYS VERO PROGRAM. When you prepare your listings you generally should use only material text, photographs, etc.

And trademarks/names that you created or own yourself or licensed from the owners. Item description text; lists of contents, lists of illustrations/photos; scanned images, etc. UNAUTHORIZED USE OF ITEM DESCRIPTION TEXT INCLUDING SUMMARIES OF CONTENTS, ILLUSTRATIONS, ETC. PHOTOS OR OTHER PROPRIETARY INTELLECTUAL PROPERTY IS STRICTLY PROHIBITED AND WILL BE REPORTED TO EBAYS VERO DEPARTMENT FOR IMMEDIATE ACTION. The item "1887 ANTIQUE COOKBOOK Vintage Cookery Confectionery Cakes Pastry Kitchen PARLOA" is in sale since Monday, November 15, 2021.

This item is in the category "Books & Magazines\Antiquarian & Collectible". The seller is "neetmok" and is located in South Salem, New York.